Framing the history of school choice 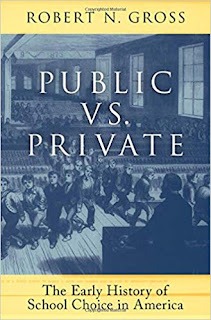 In Public vs. Private: The Early History of School Choice in America, Robert N. Gross surveys the historical ground upon which American public and private school systems emerged and the legal context in which their relationship has evolved. Gross’s major assertion is that the state-sponsored frameworks erected to support public school development were also applied to private schools seeking a secure place in the education market in the late 19th and early 20th centuries.

The state participation and public regulation that promoted private school development can, Gross argues, also inform how we understand the nation’s larger regulatory state “with its often-blurred distinctions between public and private.”

Gross doesn’t make a value judgement about the merits of public or private education, either today or historically. Instead, he deconstructs their relationship to reveal the premises upon which today’s debates are still based.

Not gripping but fascinating. Not conclusive but thought provoking. Public vs. Private provides some answers but raises more questions. Read it if you want to better understand one of the nation’s oldest dilemmas, discern its component parts, and contribute to the current discourse.
Posted by Scott Powers at 10:22 AM