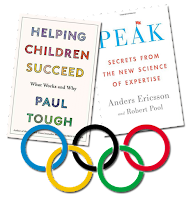 I love the Olympics. Pageantry. Drama. Suspense. Triumph. The spectacle of the whole thing. It's a time to learn about and celebrate the world's diversity. But the Olympics always reminds me more of our similarities than our differences. Sportsmanship. Pride. Joy. Disappointment. Love. Grace. Our common humanity.

Paul Tough and Anders Ericsson write about our common humanity in their recently published books Helping Children Succeed: What Works and Why and Peak: Secrets from the New Science of Expertise. Both writers eloquently interpret the findings of current research. While Tough's work leans toward nurture and Ericsson's toward nature, their ideas intersect in an interesting and not-so-surprising place.

Engagement is a multidimensional construct that includes behavioral, cognitive, and emotional attributes associated with being deeply involved in an activity. Both writers base the success of their assertions on its presence.

In How Children Succeed, Tough writes about the importance of a child's environment on the development of non-cognitive capacities, the "emotional and psychological habits and abilities and mindsets" that enable children to negotiate life effectively. These capacities include things like empathy, perseverance, self-control, and focus. In school, they are reflected in a child's ability to understand and follow directions, maintain focus, communicate effectively with others, persevere, and learn from failure. Tough asserts that non-cognitive capacities are distinct from cognitive skills in that their development is not the result of direct instruction and practice but more the byproduct of a child's environment. Furthermore, stress, the kind associated with poverty or growing up in adverse emotional conditions, inhibits the development of non-cognitive capacities. Tough points to evidence that traditional pedagogies in school perpetuate the consequences of stress because they rely on incentives that don't facilitate the kind of motivation it takes to become deeply involved in academic work.

In Peak, Ericsson writes about cognitive adaptability and the idea that we have been "overestimating the value of innate talent and underestimating the value of such things as opportunity, motivation, and effort." Scientists have realized that the brain is much more adaptable than previously thought. Geniuses, once thought to be born rather than made, are not exceptions to some rule that binds most of us to so-called normalcy. Even the most exceptional among us are not genetic outliers but ordinary humans who, through what Ericsson calls deliberate practice, have worked for whatever it is that separates them from others. Deliberate practice involves the building of mental representations, the encoding of information specific to the domain of learning that allows one to store ever-increasing amounts of information in long-term memory and advance conceptual understanding. It's hard, iterative work. But it's also qualitatively distinct from forms of practice that emphasize volume and repetition. It typically requires facilitation by experts who can assist learners in identifying and focusing on the details of performance. For Ericsson, meaning and purpose, an essential element of behavioral and cognitive engagement, are the ingredients that motivate people to maintain the intense focus and attention to detail that is required to become an expert in something.

Both writers insist learners must be active, not passive. And deep learning is not generally solitary work, but connected to others. Tough advocates interactive pedagogy in schools, discussion, and collaboration among students; project-based learning that takes students through "extensive and repeated revisions based on critiques from teachers and peers." Ericsson writes that one does not "build mental representations by thinking about something; you build them by trying to do something, failing, revising, and trying again, over and over." Passion and perseverance for long-term goals is also necessary. The work of Angela Duckworth regarding the concept of grit makes and appearance in both books. Grit is also, in part, a function of environment. In her work, Duckworth cites the work of Benjamin Bloom regarding the development of world class pianists, neurologists, swimmers, chess players, mathematicians, and sculptors. Bloom observed that in every studied field, high achievers had a strong interest in the particular field in which they excelled. In other words, it was meaningful to them. Intrinsic motivation develops when people, in the pursuit of something, are able to feel competent, connected to others, and in control of their own behaviors and goals. When people experience these three things, they become self-determined and are able to be intrinsically motivated to pursue the things that interest them, that have meaning to them, to persevere in the face of difficulty… to show grit... to become engaged.

Tough's non-cognitive capacities strongly influence the cognitive work of developing expertise that Ericsson writes about. Conversely, Ericsson's revelations about cognitive adaptability should inform discussions about supporting students growing up in less than ideal circumstances with early intervention and focused support. Both How Children Succeed and Peak are profoundly optimistic books. I think they are fundamentally about hope and potential, aspects of our common humanity restricted neither by circumstance nor genetics. Olympians are a great example of this. To become Olympic, they had to hope, care, connect, focus, practice, and persevere. They had to fulfill potential and even expand it. They had to engage.