The only thing to fear is fear itself 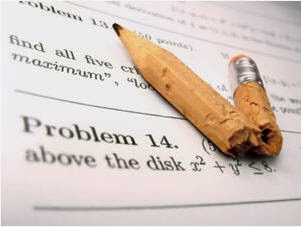 It seems to be socially acceptable to be anxious about math, noted Sian Beilock and Daniel Willingham in a review of research regarding math anxiety recently published in American Educator.

Beilock and Willingham define math anxiety as "tension, apprehension, and fear of situations" that involve math. This type of anxiety is closely associated with academic performance, often begins early in a student's career, and seems to be specific to math as opposed to other content areas.

The authors' make the case that there is a distinction between one's math skill level and having anxiety about doing math. They are both associated with performance, but anxiety, they assert, actually impacts working memory, occupying the valuable, limited space the brain has to hold the transitory information that is needed for problem solving. If you can reduce anxiety, you can free up working memory for more transitory information relevant for solving math problems.

But how do you do that?

Beilock and Willingham offer a few ideas including ensuring students learn the fundamentals early on, that math teachers are fully confident themselves regarding the content, expanding student assessment strategies (like eliminating timed tests), integrating writing exercises (more on this idea), and encouraging a growth mindset in students that helps them connect effort to outcome as opposed to believing that math ability is purely innate.

Also, Beilock and Willingham note that anxiety and efficacy have an inverse relationship. The more tension, apprehension, and fear one has about math, the less likely they will be able to produce a desired or intended result regarding math work.

A recent study published in Learning Environments Research sheds some more light on the relationships among anxiety, efficacy, and math performance. The researchers found that teacher expectations and the use of what they call reform practices were positively related to student math efficacy. Furthermore, as might be expected, efficacy positively predicted standardized test performance. For students with lower mathematics efficacy at the beginning of the study, who were also low achievers, perceptions of more frequent use of reform practices in their mathematics classes related to higher standardized test performance. So, reducing anxiety, holding high expectations, and employing reform practices can improve student efficacy regarding math which, in turn, leads to improved performance.

The first finding about teacher expectations is associated with facilitating a growth mindset in students... again, helping them connect effort to outcome as opposed to believing that math ability is purely innate. It's also about how children perceive a teacher's beliefs and attitudes and how these impact the child's self-perceptions about their own ability and the importance, or value, of the task at hand. The teacher, as almost all educational research indicates, is a highly influential part of any learning environment.

The second finding (the connection between reform practices and student efficacy) requires a closer look, however, at how the researchers defined reform practices. In this study, the authors define reform practices as teaching methods that focus on developing students' conceptual understanding, particularly students' ability to explain their reasoning rather than just produce a correct answer. In other words, students are interacting with content, the teacher, and each other in ways that differ from instruction that focuses students on passively collecting facts through practice and memorization.

There is perhaps a perception that reform practices, like the ones described by the researchers in this study, requires one to make a choice between learning content and learning how to think. However, thinking - the process of using one's mind to consider or reason about something - is a prerequisite for deep learning and understanding of content. Furthermore, standardized assessments no longer just measure procedural skills or what one can remember. They increasingly require students to extend thinking and demonstrate reasoning. If the student's learning environment does not also require students to extend thinking and demonstrate reasoning, then they will not fare well on today's standardized assessments, not to mention develop the skills necessary to be successful in higher education or compete in the workforce.